Scarboroughs brand new waterpark is now open…Book now to experience Scarboroughs new Alpamere Waterpark. It is being viewed as one of the best in Europe, on par with those in Switzerland, Florida and Dubai and includes four water shoot rides, a family wave pool and an infinity pool among just some of its features.

Park Manor Hotel is located just down the road from the Waterpark, so why not take advantage of this and book into one of our rooms here at the hotel. We are great value for money with a variety of rooms and suites available, and our restaurant has a reputation for outstanding cuisine.

On entering the Waterpark you’ll be given an electronic wristband to wear, which records the time you are in the park and can also lock your locker. Payments can also be made with the wristband at the restaurant and then you simply pay for your day when you leave.

There are four thrilling water slides for the daredevil holiday makers, each one having 35,000 litres of water pumped into them per minute, and all have been given an Alpine themed name.

Snow Storm – This slide is ridden via a four-person inflatable that will hurtle you down 14 metres of tummy churning twists and turns into the pool below. The circular inflatables are used by 4 people sitting on them facing each other, with handles for each person, a bit like riding a doughnut down a ski slope, (but a bit wetter).

Cresta Run- This ride is based on the world famous St Moritz ski slope, which is ridden head first via a racing mat for the ultimate water based thrill.

Black Run – The steepest and fastest of the four rides, with an exhilarating drop of 11 metres into the pool below.

Olympic Run – This is is a shared ride for two people on an inflatable, and is the longest of the four at around 120 metres in length.

The main feature pool is a large indoor family wave pool that erupts every half hour with 3 foot high waves for your enjoyment. For the kiddies there is a Splash and Play area to enjoy with all the family, or you may choose to relax in the 35°C outdoor garden pool which has whirlpools and bubble recliners.

After you have spent enough time getting wet, there is a restaurant available on site that offers a choice of hot or cold fresh food and drinks, with the option for something a little stronger for the adults. 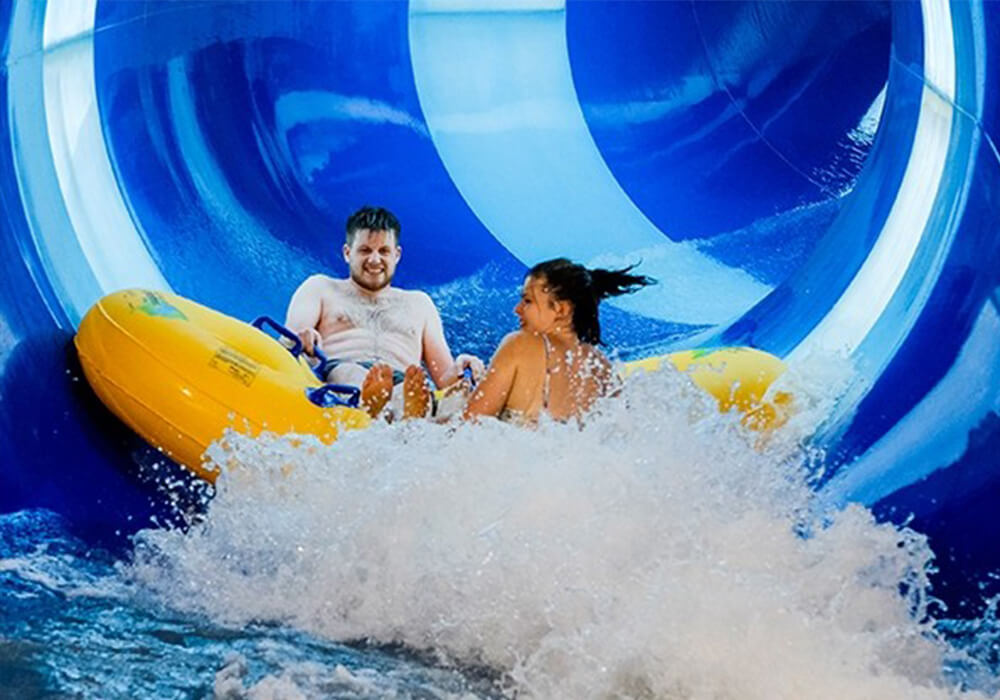